What a sensational award ceremony – the gala of Grammy Awards 2017, which just took place on February 12 in Los Angeles. Again, it was full of exciting announcements und moving words, laughter and tears, hugs and kisses – But one thing is for sure: Music has the final say. Musicians, who produced or performed...
READ MORE
SHARE
Facebook
F
Twitter
T
Google
G
Pinterest
P
COMMENTS

What a sensational award ceremony – the gala of Grammy Awards 2017, which just took place on February 12 in Los Angeles. Again, it was full of exciting announcements und moving words, laughter and tears, hugs and kisses – But one thing is for sure: Music has the final say. Musicians, who produced or performed the best music scenes in 2016 and made therefore a great contribution to the music industry, should be definitely remembered and rewarded – not only for Grammys, but also for Brits.

The Brit Awards (often simply called the Brits), presented by the British Phonographic Industry’s (BPI), are one of the most important music awards for the British music industry, celebrating the successes of UK and overseas music. The Brit Awards ceremony, which most of us already know, takes place each February, aiming at rewarding pop music. In addition, an equivalent awards ceremony for classical music, called the Classic Brit Awards, is held each May. What also makes the awards so special is the statuette given to the winners. It features Britannia, the female personification of Britain, and is regularly redesigned by some of the best known British designers, stylists and artists, including Vivienne Westwood, Damien Hirst, Tracey Emin, Sir Peter Blake and, Zaha Hadid this year. 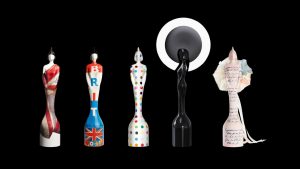 The first Brit Awards ceremony, as „The BRITish Record Industry BRITannia Awards“, was held in 1977 – exactly 40 years ago – on the occasion of the Silver Jubilee of Queen Elizabeth II. It became an annual event in 1982 and was renamed the Brit Awards in 1989. Since then, the highest profile music awards ceremony in the UK, the Brit Awards have featured a number of notable events in British popular culture. In the history of Brit Awards,  the most “successful” singer sofar is Robbie Williams, who holds the record for the most Brit Awards.

This year, the Brit Awards ceremony will be held on February 22 at London’s O2 Arena, as the 37th edition of the BPI annual pop music awards. Its hosts will be TV broadcasters Dermot O’Leary, best known for being the lead of The X Factor and Emma Willis, best known for her television and radio work with Channel 5, BBC, ITV and Heart FM. Nominations have been already revealed in early February (see the video & list below), while Little Mix and Rihanna score most nods. Having already won 17 BRIT Awards as a solo artist and as part of Take That, Robbie Williams can now add the BRITs Icon to his trophy case.

Singers, who already confirmed to join the Brits 2017 ceremony line-up, are Katy Perry, Robbie Williams, Little Mix, The 1975, Emeli Sandé, Bruno Mars, Skepta and Ed Sheeran. We can certailnly expect more stars at the music gala. The award ceremony will be live streamed on the internet and as usual, you can simply find the streaming website on whats live?. See you on February 22, at 7.30 p.m. GMT!

Calum Scott – ‚Dancing On My Own‘

Mastercard British Album Of The Year

British Artist Video Of The Year

Adele – ‚Send My Love To Your New Lover‘

Coldplay – Hymn For The Weekend‘

Christine and the Queens