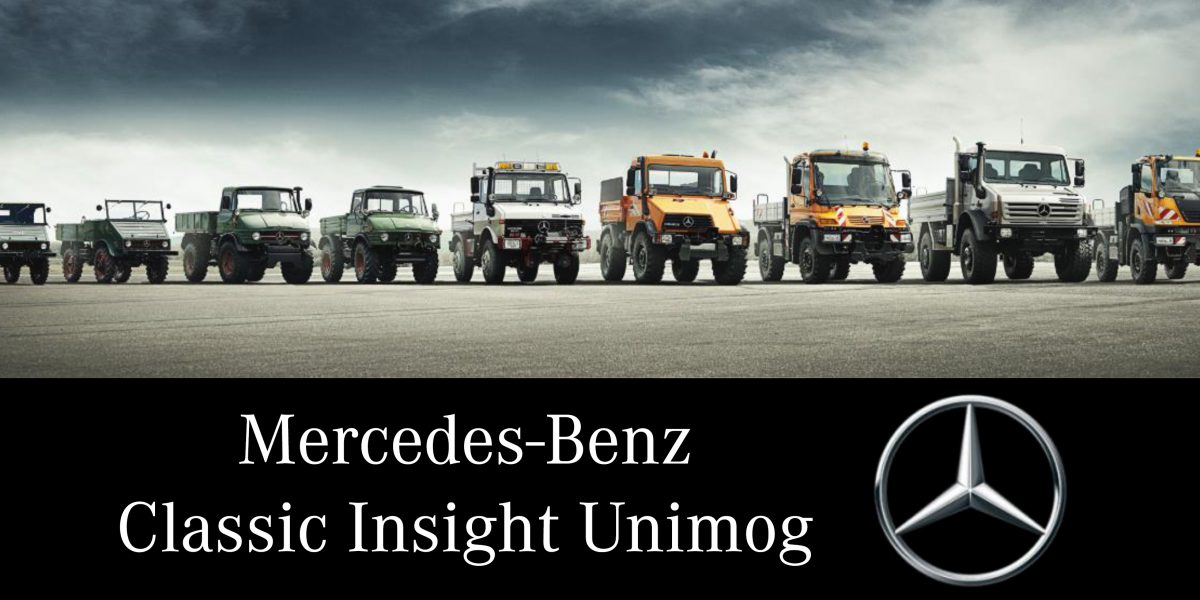 No mountain high enough, no terrain deep enough: the all-rounder September 14, at 3 p.m. GMT Ellen Lohr is going to present a live stream live from the Unimog Museum Gaggenau in Germany. Ellen Lohr is the first and only woman to date to have achieved a DTM victory, which she won in May 1992...
READ MORE
SHARE
Facebook
F
Twitter
T
Google
G
Pinterest
P
COMMENTS

No mountain high enough, no terrain deep enough: the all-rounder
September 14, at 3 p.m. GMT Ellen Lohr is going to present a live stream live from the Unimog Museum Gaggenau in Germany. Ellen Lohr is the first and only woman to date to have achieved a DTM victory, which she won in May 1992 at the motor racing festival in Hockenheim.

But lets take a closer look to the history of the Unimog itself. 9 October 1946, the first ready-to-drive Unimog chassis stands in front of its inventors. Although they don’t yet realise it, their idea will go around the world: the “universally applicable motorised machine” (Unimog, abbreviation of the German “Universal-Motor-Gerät”) is hungry for challenges. The most demanding of tasks for a machine and the most difficult of special missions – that’s Unimog terrain. And that’s precisely why this vehicle was built, with maximum versatility built into in its genes. The sum of its qualities as an all-rounder make the Unimog an indispensable helper – as well as a popular hero figure.
When the first Unimog was completed 70 years ago, it was conceived as an agricultural utility vehicle: the then occupying powers had given their permission for the design, and, in the early post-war years, there was also no lack of demand for such a machine. One of its hallmarks was its vehicle concept, which is still valid to this day: four identically sized wheels, all-wheel drive, loading area, implement mounting options and high tractive power. The Unimog was designed as a mobile and stationary driving engine and also as a delivery vehicle for agricultural produce. Differing significantly from conventional tractors, it offered clear additional benefits. With universal applicability built into the Unimog’s genes, it was hardly surprising that it soon conquered other areas of use. Agriculture and forestry, emergency services and disaster relief, municipal services and the military, construction industry and mining, globetrotter and motor sport, even lifestyle: the Unimog’s range of application is wider than that of probably any other motorised vehicle. This likeable hero figure also made it popular as a model toy.
The fact that the first vehicle was completed in late 1946 was the first masterly performance in the history of the Unimog. After all, the early post-war years were dominated by severe shortages of energy and raw materials as well as components and other necessary resources. Series production began in Göppingen at Gebr. Boehringer GmbH, this likewise being attributable to the post-war situation: the two engineers Albert Friedrich and Heinrich Rössler were employees of the then Daimler-Benz AG until the end of the war. Under Control Council legislation, they were forced to stop working for that company. It was the Unimog project that reunited them, for, independently of each other, they both had the idea for a “universally applicable motorised machine”.
Friedrich had already taken steps to formulate the concept and make preparations for production outside of Daimler-Benz. Rössler joined the development team and contributed some vital technical ideas. Founded on this fruitful cooperation, the first Unimogs were manufactured in Göppingen. In 1949, Boehringer delivered the first series-produced vehicle to the mayor of Bürg near Backnang. This very first customer exploited the full universality of the innovative vehicle, using the Unimog to tend his farm, woodlands, vineyards and orchards and to drive fruit to market in Stuttgart.

Funmog – off-road vehicle of the year
The Unimog has even conquered the market for lifestyle vehicles, for there are special versions for the boulevard: the Unimog was discovered as a recreational vehicle in Japan in 1994, after which it advanced to a status symbol for an especially select section of the population. Mercedes-Benz responded to this trend with two specially equipped different classes of Unimog tailored to Japanese tastes, their special status being indicated by the name Funmog. One is a metallic red Unimog U 90 of the 408 Series, while the other is a black/blue metallic painted U 1400 of the 427 Series, both of them adorned with gleaming chrome accessories. The Funmog was voted Off-road Vehicle of the Year 1994.
In late 2005, the U 500 Black Edition impressed as a recreational vehicle for individualists at the Dubai Motor Show. This lavish Unimog is from the tuner Brabus, which uses carbon fibre, leather and Alcantara in the interior, while additionally installing the sound and navigation system from the S-Class. On the outside, the lavish vehicle stands out from its counterparts thanks to a front apron with a stainless steel insert, a roll-over bar behind the cab in the same material, vertical exhaust pipes and a platform with integral side trim panels. A long final drive ratio gives the 11.99-tonner a reported top speed of over 120 km/h. Although such a speed is not permitted on German roads, the same is unlikely to apply in the desert of Dubai.
A different kind of lifestyle is preferred by another group of Unimog users: the globetrotters. While some choose to order a new vehicle and have it customised by a bodybuilder for an extreme long-distance journey, others like to give a used vehicle a second life. Some globetrotters leave normal civilian life behind them for a period of months or even years. The same is done, albeit for a shorter length of time, by people who have made the Unimog their hobby: such as working on it in the garage, with their own collection, at club meetings or logging in the forest.

Don’t miss to join the live stream , on September 14. at 5pm/CEST, to see the Unimog in action – watch here.